Check out all the different types of spices that you can use, including sweet spices, hot spices, common spices, exotic spices, and spice mixtures.

If you’ve been cooking for any stretch of time, you know that spices and herbs are essential in making good food.

Today, I’ll share the top 35 cooking spices that can take your food up a notch!

A spice is part of a plant that is used to add flavor or color to cooking. A spice can either be seeds, root bark, powder, fruit, flower, or other plant material.

What are the 10 most popular spices?

What are the different types of spices?

All the different spices explained 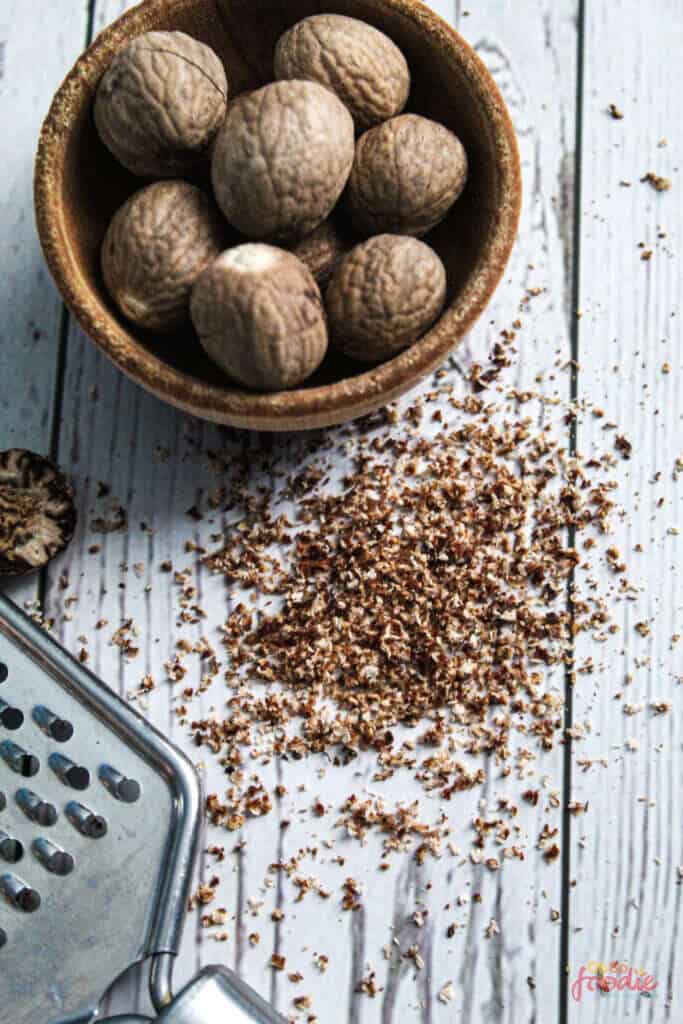 Nutmeg is a sweet spice that comes in both a seed form and a powdered form. Nutmeg seeds are oval-shaped, wrinkled, and brown to grayish-brown in color. Nutmeg is a warm and aromatic spice that has a woody, slightly nutty, sweet flavor that is often used in sweet and savory recipes like eggnog, lasagna, sauces, meats, and many baked goods. 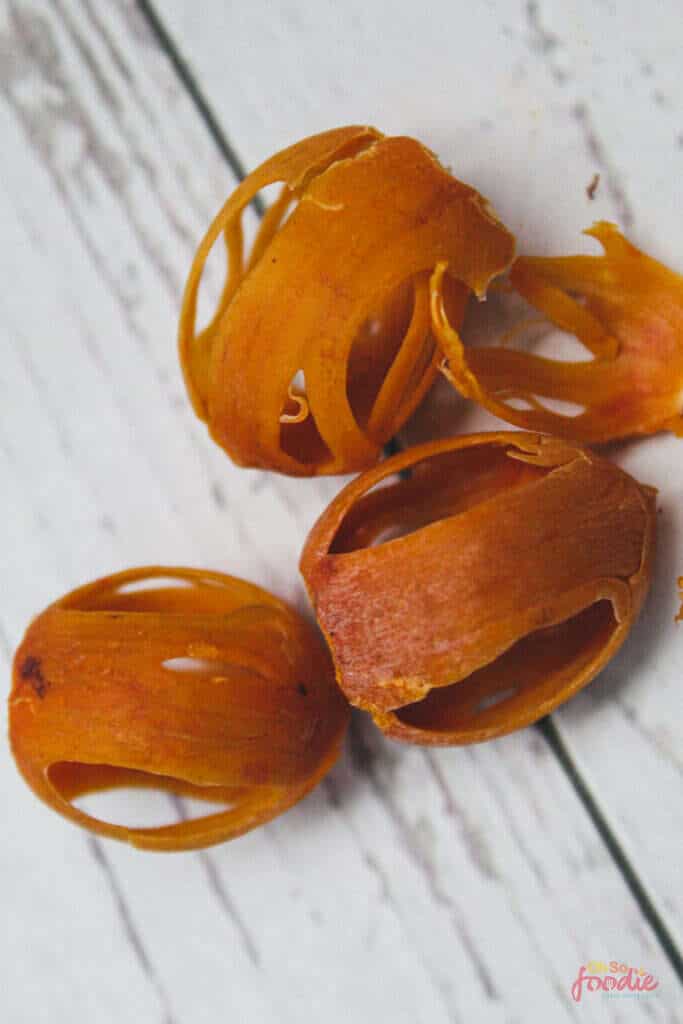 Mace is a warm spice that comes in both blades and powdered form but is more popular as a powder. You can identify mace as reddish, yellowish, or brownish lacy coverings of the nutmeg seed.

Mace spice has a mild nutmeg flavor and is also warm, nutty, and intensely floral with lemon notes. It is used a lot in spice blends, curries, soups, and baked goods like old-fashioned donuts, vegetables, cream sauces, and more. 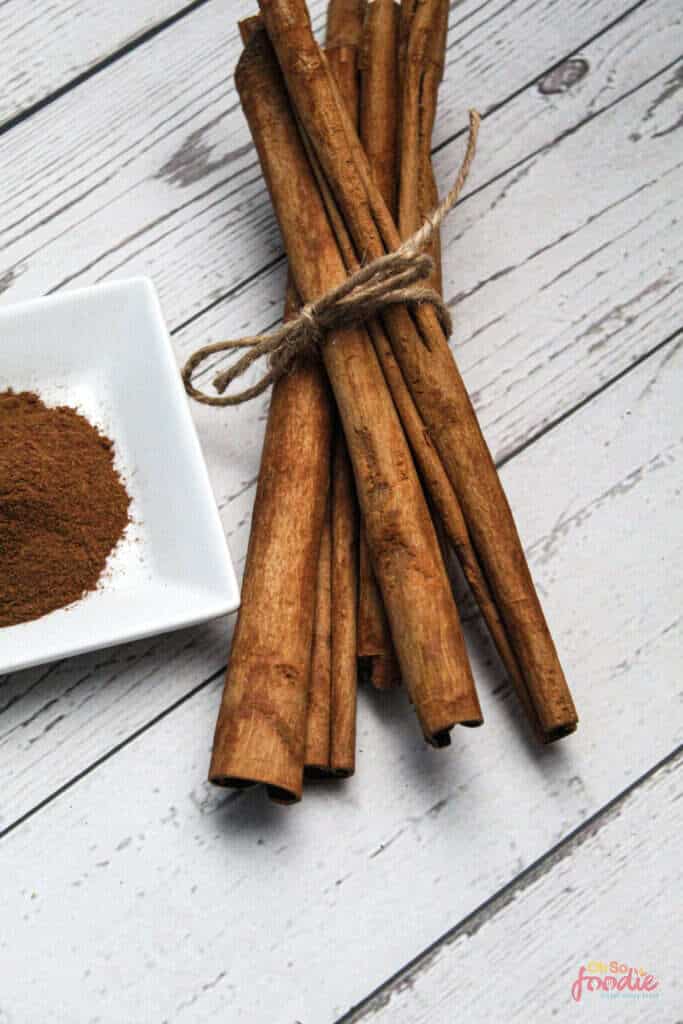 Cinnamon is a sweet, aromatic spice made from tree bark. Cinnamon spice comes in many forms including whole cinnamon sticks, cinnamon powder, and cinnamon leaves which are significantly less popular.

It is the perfect spice for fall recipes and can work for baked goods, teas, stews, and curries, and it is often used in a long list of fall beverages including apple cider cocktails, cinnamon milk, hot chocolate, etc. 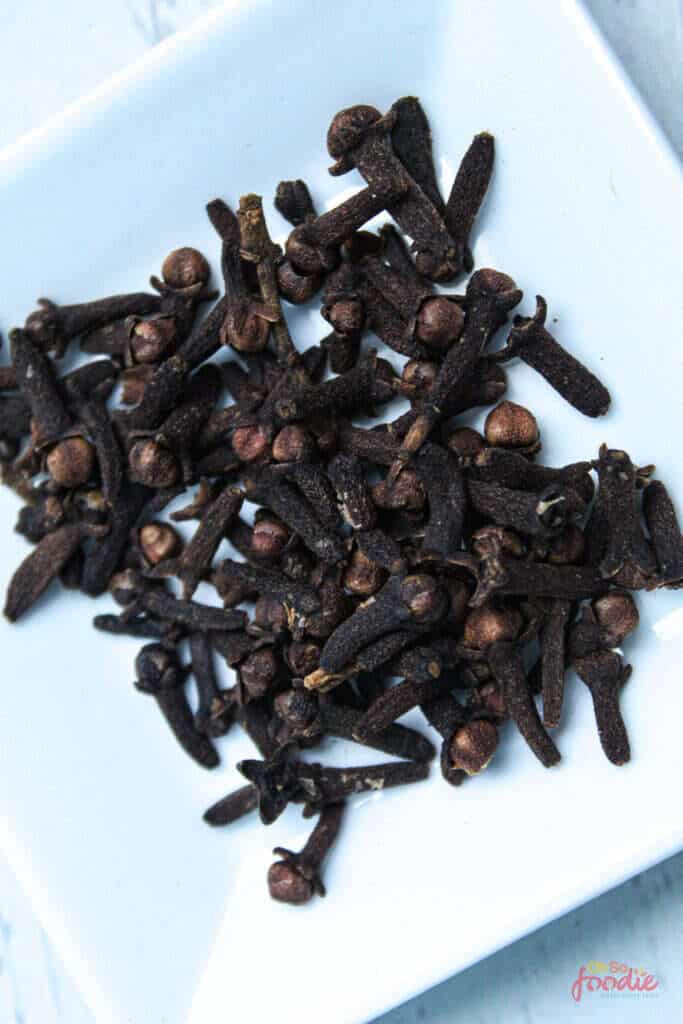 Cloves are a type of sweet aromatic spice with a strong, woody smell and a sweet, bitter, and astringent taste on the tongue. They’re harvested from the immature flower buds of an evergreen tree and are reddish brown in color. Clove spice comes in the ground form or as whole cloves which look like small reddish to brown nails which are 2 centimeters in length with 4 spreading sepals and a bulbous top.

Cloves are used for cooking hams during the Christmas season in spice blends, meat rubs, and teas, and even added to baked foods. 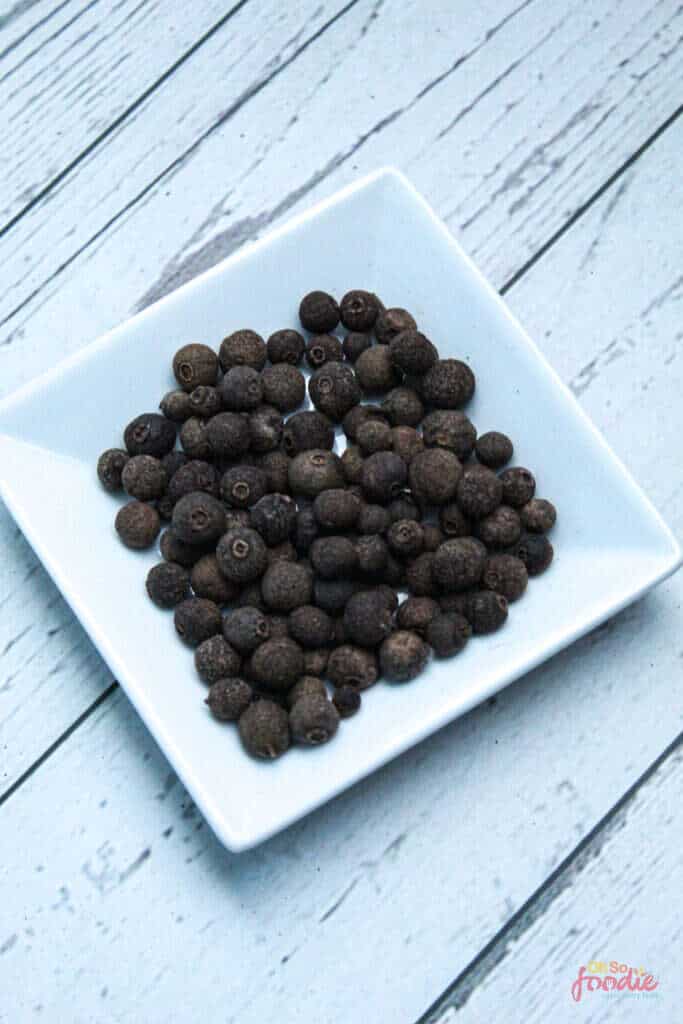 Allspice is a sweet warming spice that smells like a combination of cinnamon, nutmeg, black pepper, and cloves hence its name. Allspice comes from a dried berry called Pimenta dioica that looks like a black peppercorn, albeit a little larger, and is native to the West Indies and Central America. Due to its flavor, many people believe that allspice powder is a combination of all the sweet warm spices!

Allspice comes in both ground form, which is very popular and whole berries. This spice is best suited for sauces, baked goods, beverages, dressings, spice blends, pumpkin pies, glazes, and so much more.

Another great sweet spice is cardamom. Cardamom has the appearance of small spindle-shaped green pods with thin green skin and black inner seeds. Cardamom has a complex aroma which I personally describe as spicy sweet and citrusy and has a minty, piney, floral sweet taste.

When whole this spice has the appearance of round brown seeds that are light and soft, flat on one side and pointy on the other side.

Coriander spice has a turpentine-like, green, herbal, earthy yet floral aroma and fresh citrus taste. however, many people don’t like this spice and say that it simply tastes like soap!

Coriander is great for marinades, sauces, curries, vegetables, doughs, drinks, pickles, and more. I love using coriander in my seafood spice blends too!

Vanilla beans are long podlike fruits produced from the flower of the tropical orchid plant called Vanilla planifolia. The flavor of vanilla bean spice is cream-like, earthy, subtly sweet flavor reminiscent of raisins, and is quite expensive.

Because they’re so expensive, they aren’t very popular, but most people who cook with vanilla beans will use if for things like custard, creme brulee, cocktails, infused in sugars or syrups, etc.

Hot Spices to spice up your cooking 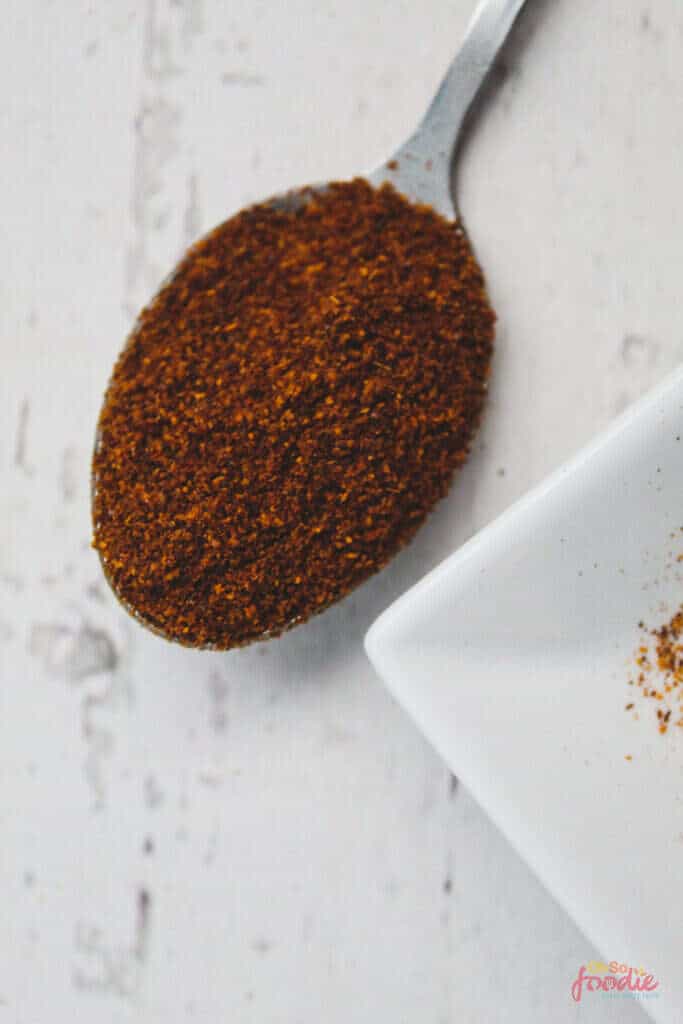 Cayenne pepper is s hot spice made from a type of thin hot chili pepper with a curved tip. It is green when unripe, but turns red once it has ripened. Cayenne peppers can be found in both fresh and powdered form but is more popular in the powdered form.

As a powder, you’ll recognize cayenne pepper as an orange-red fine powder with a spicy kick.

Cayenne pepper is moderately hot so it is used to add a kick to many recipes including stews, soups, spice blends, sauces, etc.

Black pepper is a spicy, complex, and pungent spice with hints of citrus and pine made from the dried, blanched, sun-dried berries of the peppercorn plant.

You can recognize black peppercorns due to their dark brown-black and wrinkled outer layer, which when cracked, reveals a  lighter color inside.

Black pepper is sold both as whole berries and as a ground spice which you’ll recognize as a dark brown powder with lots of light brown and even white specks.

White pepper is another spice from the peppercorn plant. It is with fully ripened peppercorns that are fermented in water, and whose black outer skins are peeled off to reveal the white inner seed inside the peppercorn.

You can find white peppercorns sold as whole berries or as a powder. This spice is a less complex version of black pepper and its flavor can be described as musty, spicy, and grassy.

White pepper is used in Chinese, Swedish, and Vietnamese cuisine, and in the West, it is used in lighter-colored dishes that need a little kick without leaving black specks behind like certain soups, sauces potato recipes, etc.

Chipotle powder is an earthy, smoky, and spicy type of spice made from jalapenos that are ripened, dried, smoked, and then ground to form a powder.

Chipotle powder works well in dry rubs as well as in many Mexican recipes like chili, tacos,  quesadillas, and even pizza! 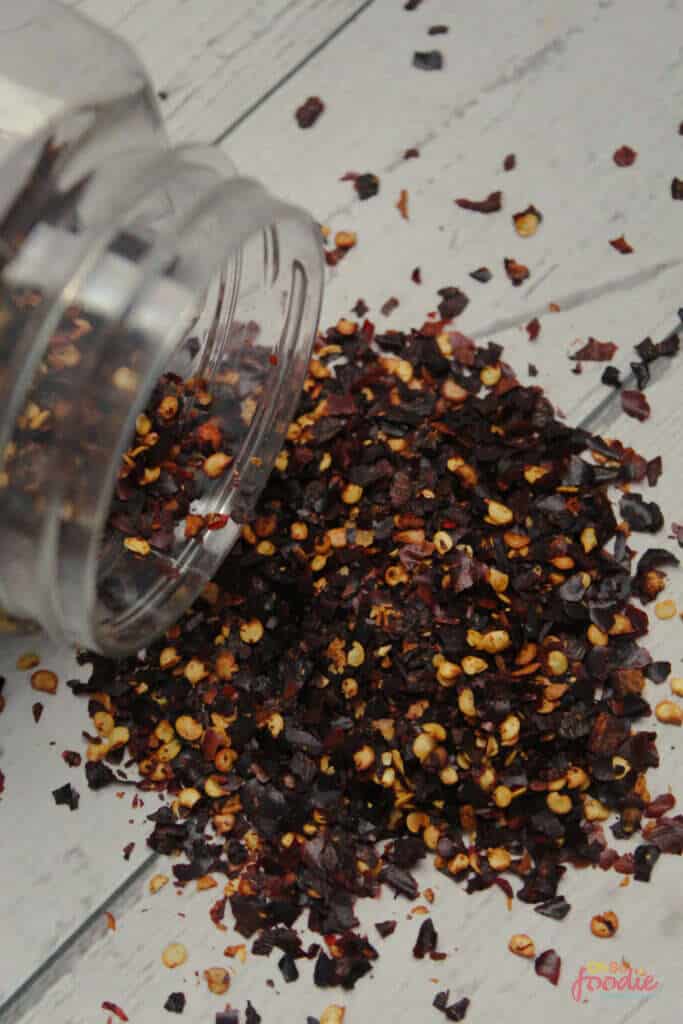 Red pepper flakes’ heat level depends entirely on the type of chile used in a particular batch, but generally, red pepper flakes have a flavor that is zesty and fiery. It’s very common and used a lot in recipes like pasta, sauces, spice blends, etc.

Common spices in almost every kitchen

Most people know and love ground ginger which is a tan-colored powder, however, there are also fresh ginger roots that are also popular. Ginger roots are knobby and twisted with light brown skin and pale yellow flesh on the inside. 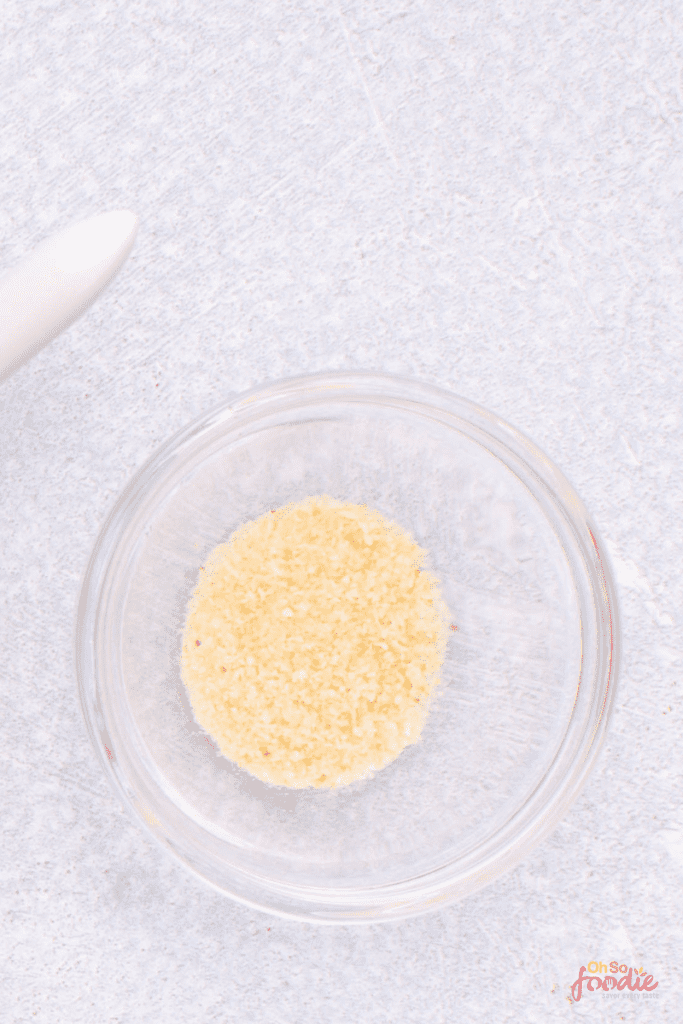 Garlic powder is a super common spice made from ground, dried garlic. It is a light yellow spice that is very versatile in the kitchen. Although garlic powder is milder and smoother than fresh garlic cloves, this spice still offers a robust, pungent, garlicky flavor to recipes like soups, stews, spice blends, meatballs, seafood, vegetables, chili, burgers, etc. 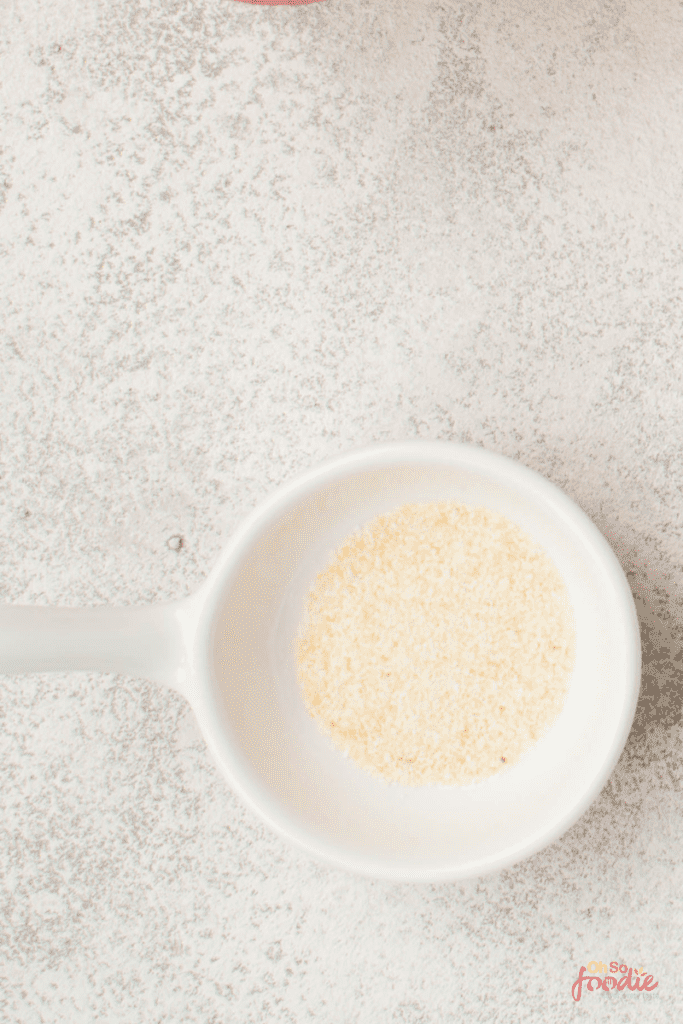 Onion powder is a sharp, savory, pungent spice with hints of sulfur made from dried ground onions.

It’s very versatile and can be used in a plethora of recipes including dry rubs, marinades, meat, veggies, casseroles, etc. 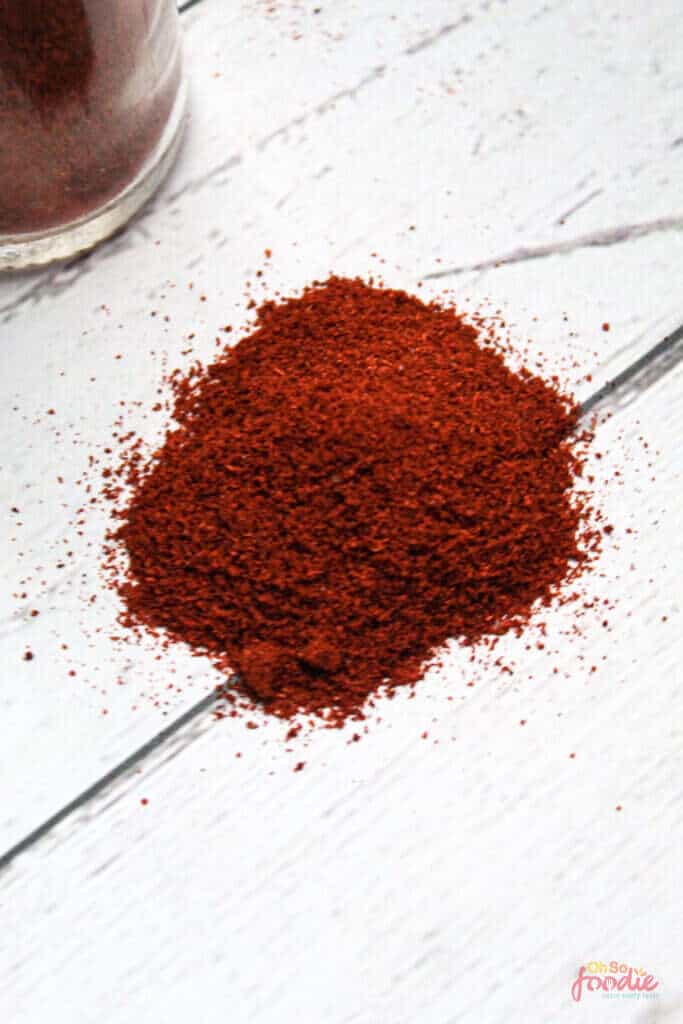 Paprika is a vibrant red spice made from ripe red dried paprika peppers. Paprika can be either hot, smoky, or sweet depending on the kind you purchased and the chile peppers used to make it.

Paprika is popularly used to add color to dishes like soups, stews, goulash, and even in spice blends, marinades, etc.

Saffron has a sweet, floral, earthy flavor and fragrance and is best used in recipes like saffron rice, chicken, pasta, seafood, and more.

These tiny, black, brown, or reddish seeds have a pungent, spicy, savory, nutty flavor and are often used to make recipes like soups, stir-fries, sautéed, stews, sauces, curries, dhals, for garnish, and more.

Turmeric is an exotic, pungent spice native to South Asia. Turmeric can be used fresh as in turmeric rhizomes, but it is popularly used as a ground powder.

Turmeric powder is bright yellow and has an earthy, musky bitter flavor with peppery undertones.

Turmeric powder is used in many Indian, and South Asian dishes and can be used for vegetables, spice blends, rice, stews, soups, golden milk, and even as a garnish!

Amchur powder or Dried mango powder is made from unripe mangoes that have been sliced, dried, and ground into powder. Amchur powder has a tart, sour, tangy flavor that works well in recipes like curries, chutneys, chaats, samosas, and more. 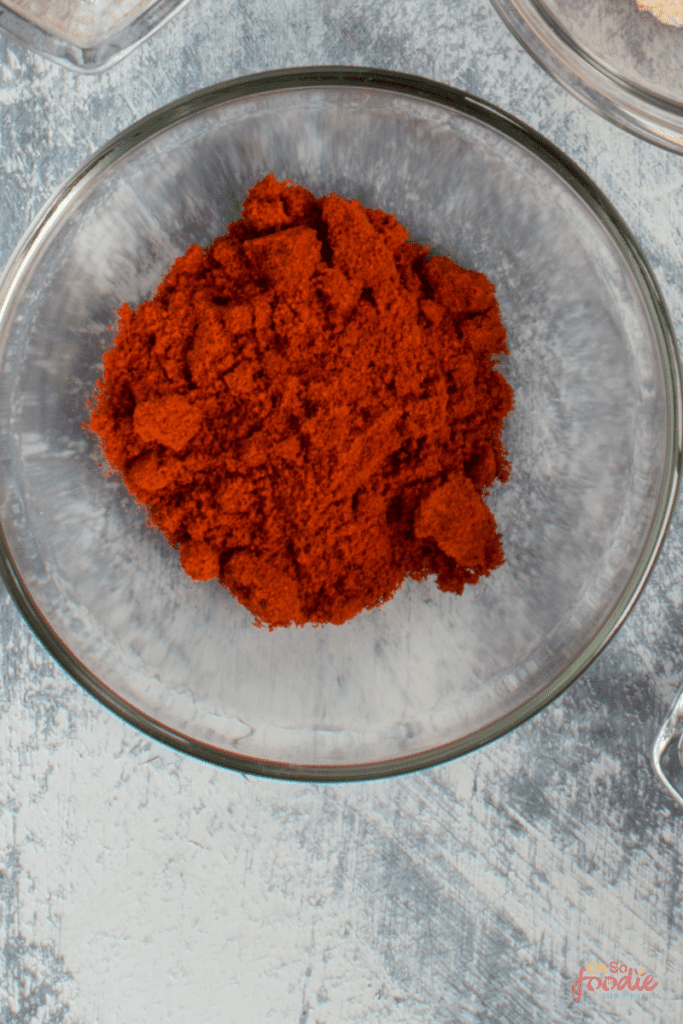 Chili powder is a fiery red or dark red savory spice mix made of ripe chile peppers, cumin, salt, garlic, oregano, and sometimes some other spices and herbs. Chili powder can be mild to spicy, based on how much cayenne pepper is used in the mix. This spice mixture has an earthy flavor that works well in Mexican and Southwestern dishes such as tacos, chili con carne, stews, soups, beans, kebabs, enchiladas, etc.

Garam Masala is an Indian-inspired spice mix made from spices like cumin, cinnamon, mace, nutmeg, black cardamon, coriander, black pepper, cloves, ginger, bay leaves, and green cardamon. Garam masala is warm and fragrant and has a plethora of different flavors due to all the different spices. Use garam masala powder to make delicious roasted vegetables, curries, stews, meats, and more.

Note, the number of spices will change depending on the brand you pick up since some brands use fewer spices in their garam masala mixes. However, authentic Indian Garam marsala uses 11 spices.

Apple pie spice is a sweet, warm mix of spices including allspice, cinnamon, nutmeg, ginger, and cardamon although some brands omit the cardamon and ginger. Apple pie spice can be used to add warm, sweet flavors to foods like pancakes, waffles, muffins, hot chocolate, oatmeal, etc. 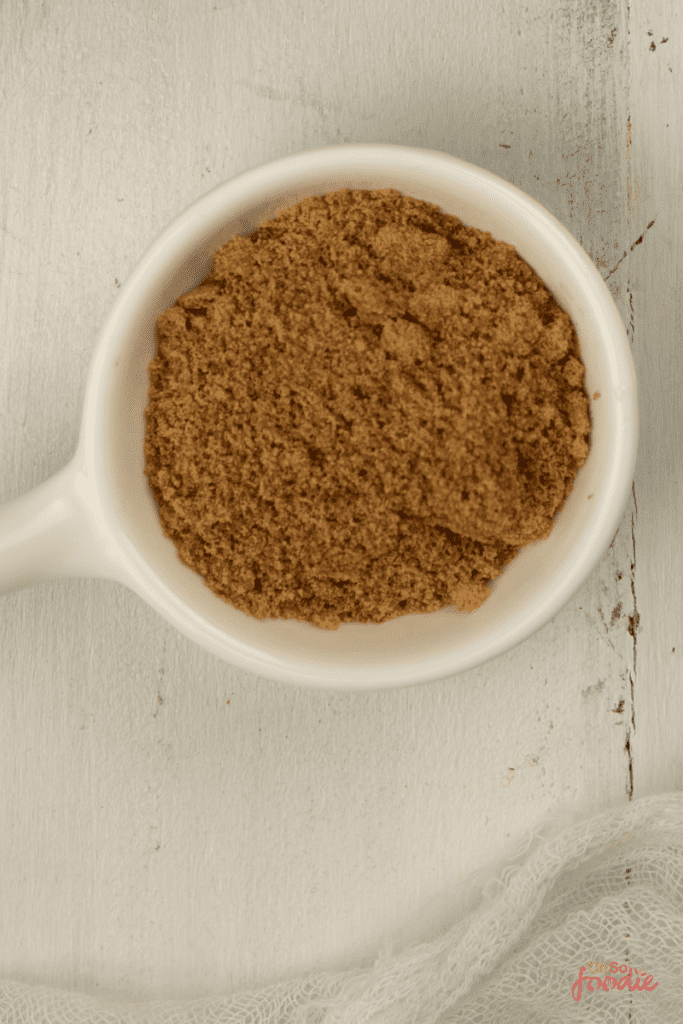 Chai spice mix is a blend of ground sweet spices like ginger, cinnamon, green cardamom, cloves, allspice, and black pepper. Chai spice mix is used to make chai tea but because of the spices in this mixture, I like to use it to make cakes, muffins, pancakes, cookies, and pies as well. 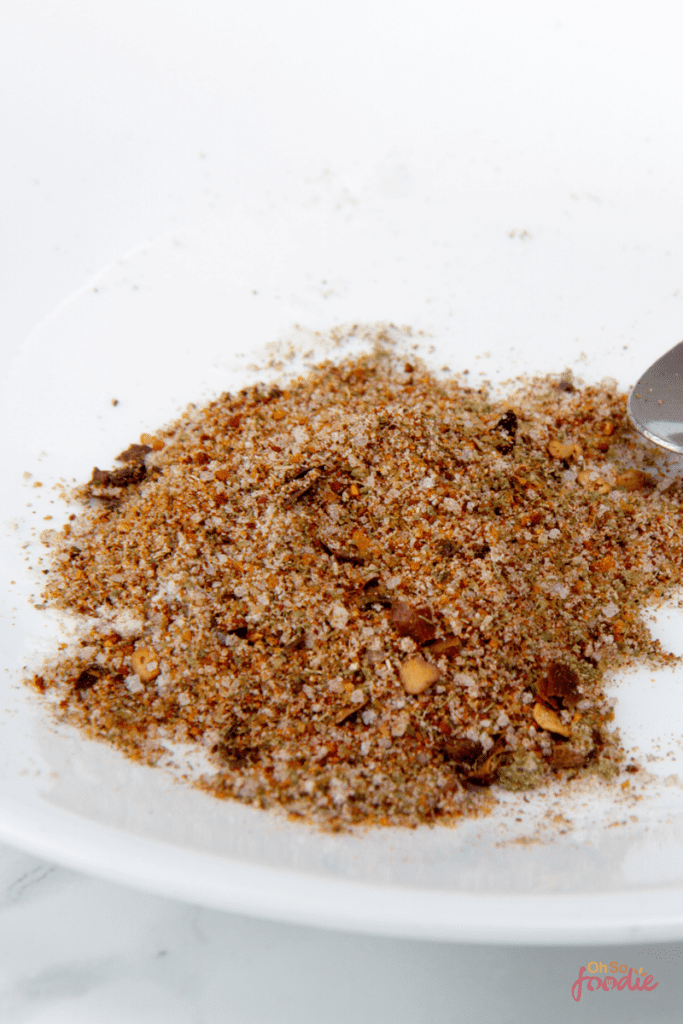 Taco seasoning is a popular spice mixture made with ingredients like chili powder, garlic powder, onion powder, paprika, cumin, black pepper, salt, and dried oregano. Taco seasoning has a warm, and spicy flavor and is great for adding to tacos, stews, soups, and casseroles, and also for adding to creamy dips and sauces. 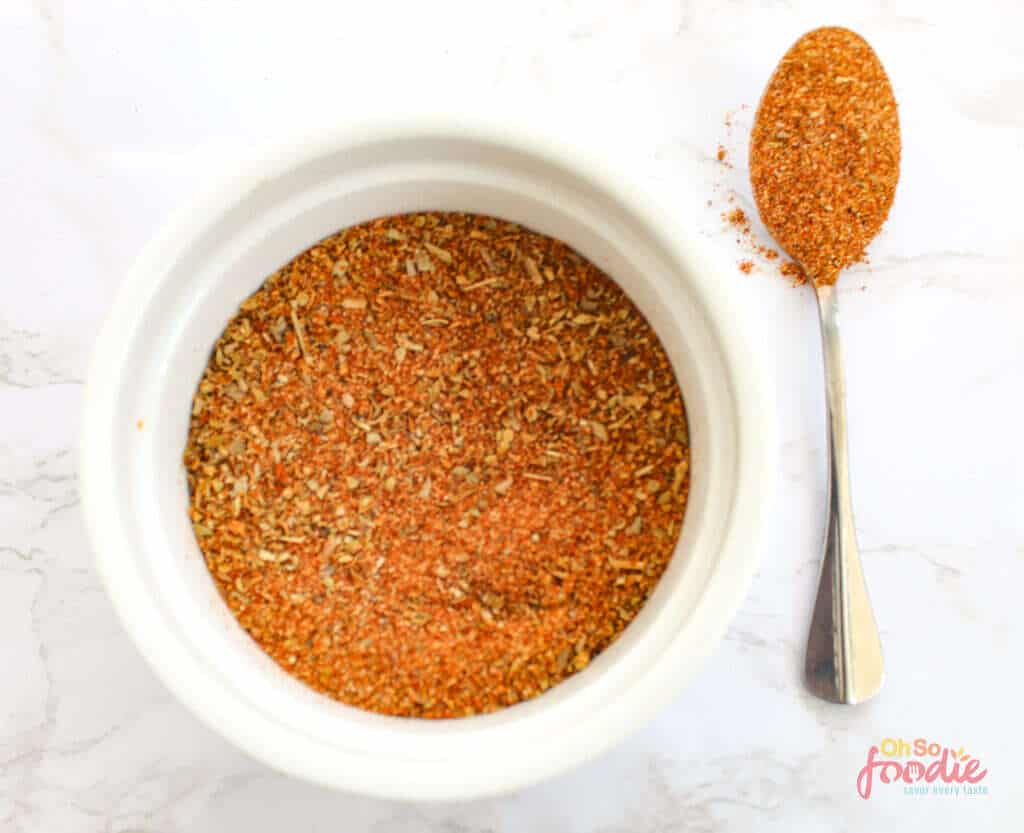 Curry powder is an Indian-inspired blend of spices and herbs which include fenugreek, turmeric, cumin, coriander, black pepper, and ginger. Some brands use other spices like nutmeg, bay leaves, cloves, and red pepper in their curry powder mix as well.

Curry powder is golden yellow in color and is a pungent spice mix with earthy, robust, spicy flavors that works well in curries, pilafs, roasted veggies, dips, and more. 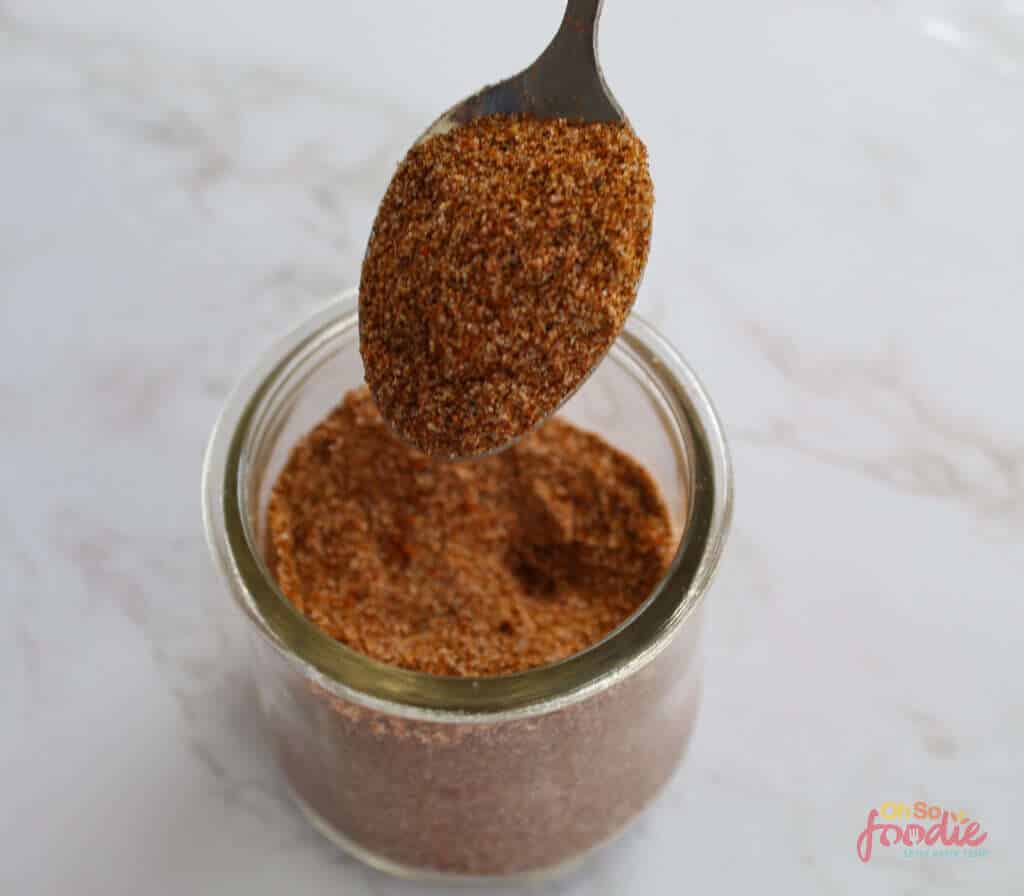 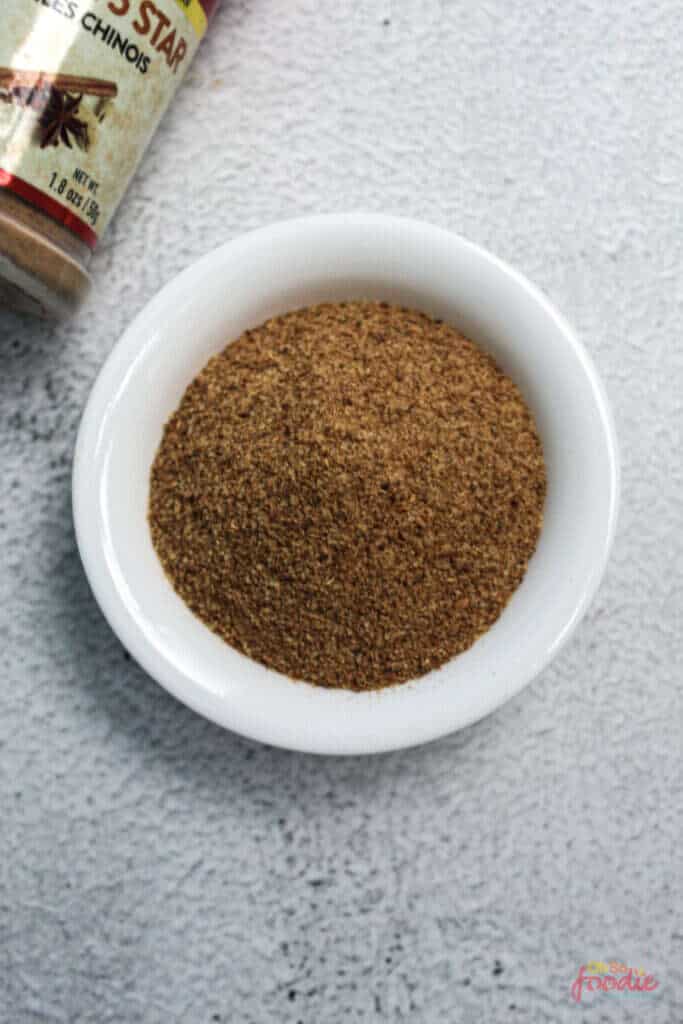 Chinese 5 spice seasoning is a spice mix made with different combinations of spices based on the brand. Generally spices like star anise, fennel, cinnamon, Sichuan peppercorns, cumin, cloves, bay leaves, and white pepper. This spice mix has a complex flavor in that it is warm, sweet, pungent, spicy, and sour all at once. Use Chinese five spice for rice dishes, meat dishes, and more. 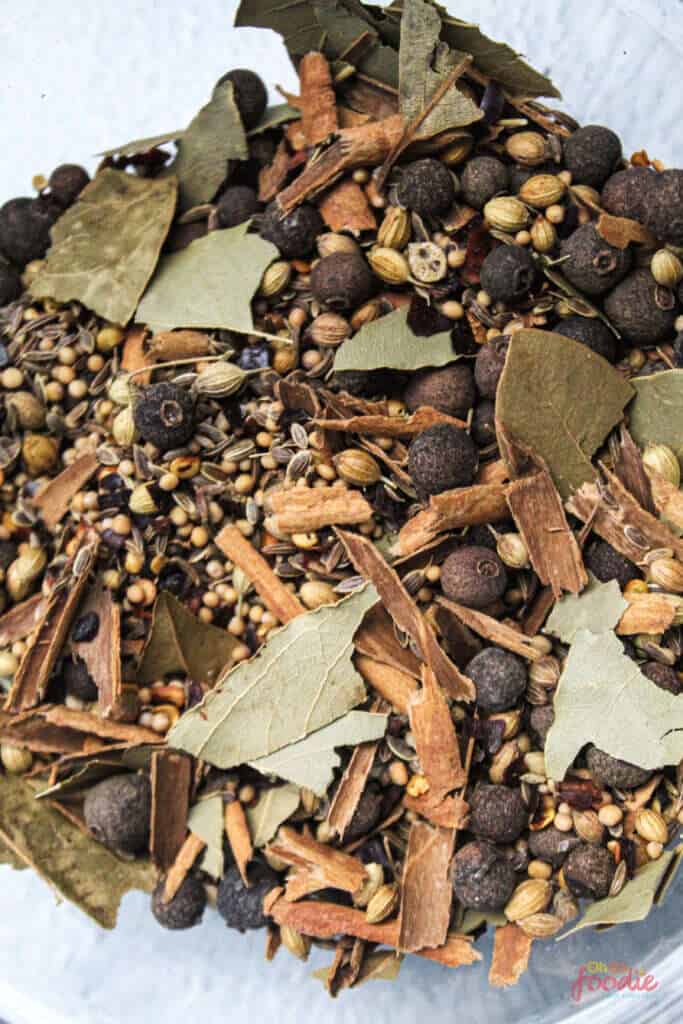 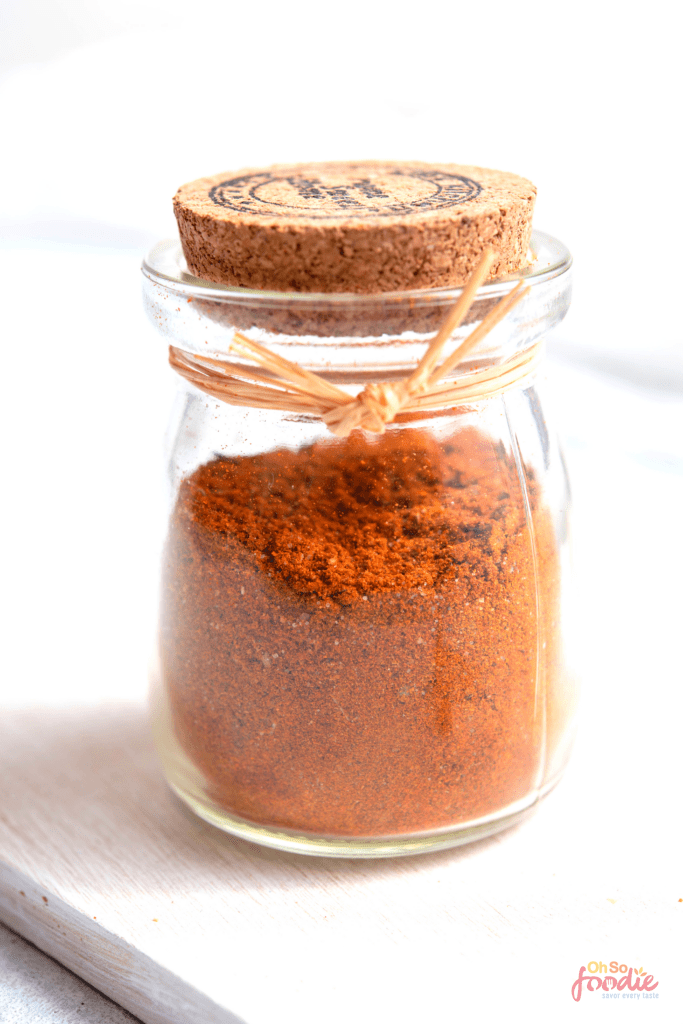 Another awesome spice mixture worth mentioning is the southwest spice blend. This spice mixture is made with dehydrated onions, garlic, pepper, herbs, and spices like cumin, paprika, bay leaves, and coriander. It’s a versatile spice blend that can be used to season vegetables, seafood, chicken, steak, pasta, eggs, sauces, dips, and more.